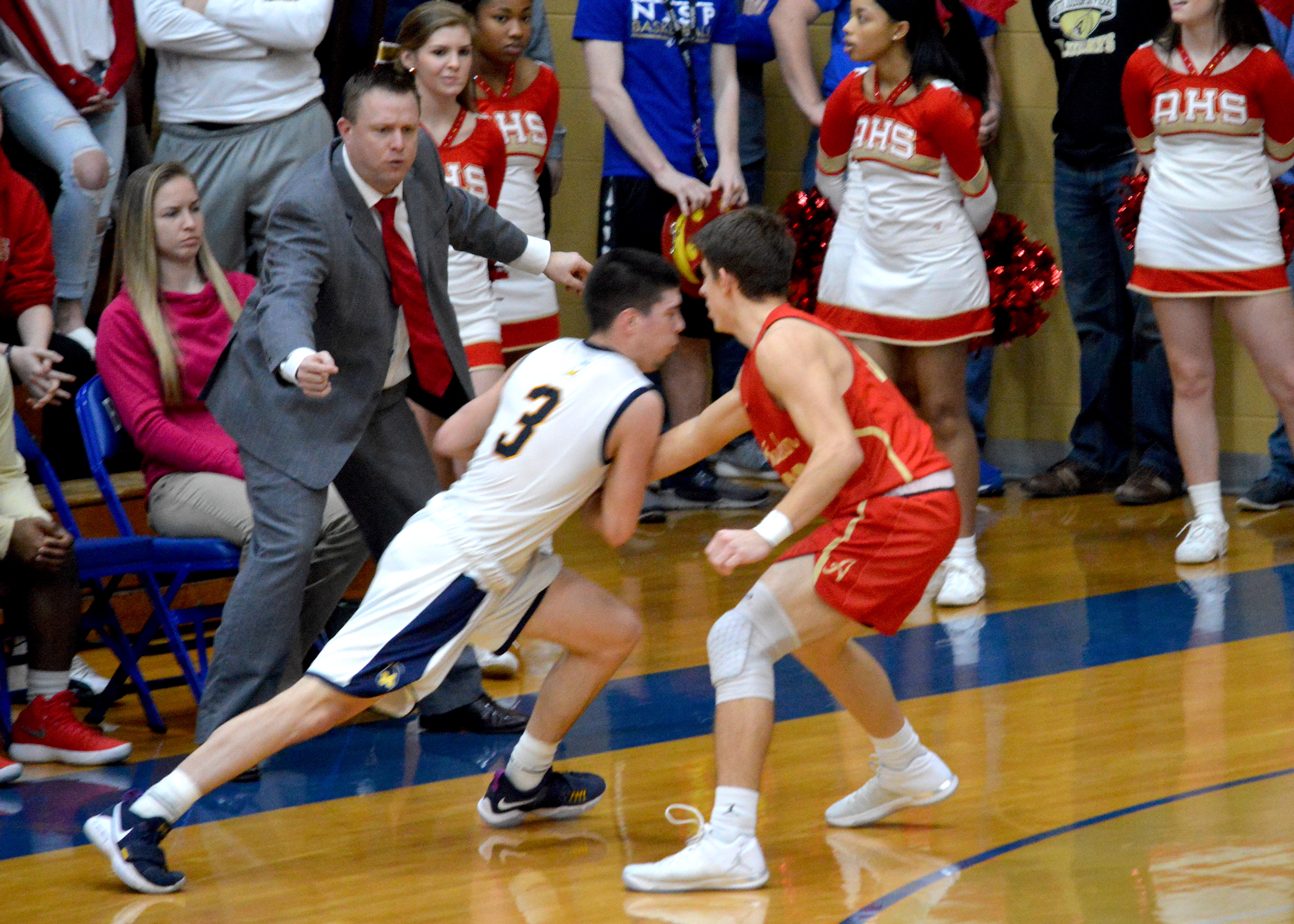 For 31 minutes and 59 seconds, Saturday’s regional tilt between Marquette and Andrean played out like a rerun of the postseason clash one year ago inside the same gymnasium featuring the same two teams. The events that unfolded in the final second of the sequel killed an overtime bid, though, and left many of the Blazer faithful wondering what if.

A 59er free-throw with 1.0 seconds on the clock following a loose-ball foul was the decisive point in Marquette’s 71-70 defeat to Andrean in the semifinals of the Class AA North Judson Regional.

Offense was the name of the game in the opening quarter. Colin Kenney recorded nine in the first while Dayn Staab added seven as Andrean led 21-20 after eight minutes.

Things simmered down in the second period. Kenney tacked on seven more points in the frame and Joe Andershock and Karsen Grott each made a basket. Marquette remained within 33-31 of Andrean at the break. Kenney’s 16 points led all scorers at halftime.

Jake Tarnow came alive for the Blazers in the second half. He led Marquette with seven third-quarter points, but the 59ers expanded their lead to as many as 14 points. The Blazers faced a 62-50 deficit entering the fourth.

Tarnow continued to work his heroics while Kenney willed Marquette in the final frame. With five minutes remaining and a three-possession cushion, Andrean opted to take the air out of the ball and run some clock. The Blazer defense forced a trio of turnovers and an Andershock triple made it a two-point game with three-and-a-half minutes to play.

Marquette trailed 70-67 in the closing minute before Tarnow nailed a three from the left wing to tie things up with 27 seconds remaining.

Able to hold for the final shot, Andrean failed to convert on a layup, but Marquette was whistled for a foul on the impending rebound with 1.0 seconds on the clock. Nicholas Flesher hit the first of two foul shots to put the 59ers on top, 71-70.

To prevent the Blazers from potentially setting up an inbounds play to tie or win the game, Flesher intentionally missed the second free throw. The free-throw try appeared to miss the rim altogether; instead, caroming off the padding beneath the backboard to Andershock, who could only fire off a one-handed heave that sailed wide left of the hoop. Nevertheless, it was ruled to have made contact with the rim, thus negating a dead ball.

Kenney, Marquette’s all-time scoring king, amassed a game-high 26 points. Over his 108 games in a Blazer uniform, the Furman commit accumulated a program-record 1,884 points. He overtook Ryan Fazekas’ previous mark of 1,562 points this past January.